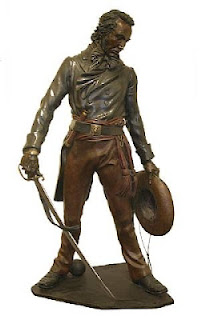 
What you may not realize as you read your Bible, but there is a space between Jude and Revelation.  If you have your Bible near you now, open it up to the end of Jude, right before the beginning of Revelation.  Put your hand there and think about this.  Genesis through Jude is history of God’s story.  Revelation is the future of God’s story.  What’s in between here?


God’s story doesn’t stop and wait till Jesus Christ comes back.  God’s story has continued for the last 65-70 generations, almost 2000 years.  Men and Women have been fighting in this battle between good and evil for all this time.  Some for God, some against Him.  Many who formerly were against God, turned, they changed sides and fought for God. Many died for Him.  All are part of history.  All are part of His story.


The question for you, as you recognize that you too, are part of His story, is this, “What part do I play in this?”


There is a story from the historical account of the Alamo.  Surrounded by the enemy and outnumbered as much as 50 to 1, and with no hope of relief, Colonel William Travis stepped forward and spoke to his men.  He offered them a chance to leave and live to see another day, but he challenged them to stay and fight to make a difference, knowing that none of those who stayed would make it out alive.  He drew his cavalry saber and scratched a line in the dirt.  Those who wished to sacrifice all they had for something bigger than themselves were to cross the line.  Those who wished to live could stay on the other side.  History tells us that one man, Lewis Moses Rose, did not cross the line.  He left the Alamo and escaped with his life.  All of the others died in less than 13 days when the Mexican Army overran the fort.


In God’s story, the battle between good and evil, we all are given a choice.  None of us are making it out of here alive.  Will you fight for the side of good, conforming your life towards God, serving Him by doing His work in this world, providing for widows and orphans, feeding the needy and the poor, sharing the Gospel with those who don’t know Jesus, giving of your time and money to make ministry happen, and standing up for what is right against those who would do evil?  Or will you choose the way that seems easier, making as much money as you can for yourself, spending your life entertaining yourself, and closing your eyes to the very real evil that is occurring around you?


The line is drawn in the sand.


Will you stand up and fight?


Will you matter in this world?


When God’s story is told in the future, will you’re part of the story be told with respect and awe as someone who fought the good fight, who sacrificed for something bigger than themselves, or will you be just a footnote as another selfish person who cared only about themselves and never made a difference?


Pastor Rodger
Posted by Mountain View Christian Church at 8:42 AM No comments: Links to this post

Mountain View Christian Church
Phoenix, Arizona, United States
Mountain View Christian Church is a small community church located at 2927 East Campbell Phoenix, AZ 85016. We use expository, Bible-based teaching and have a mixed worship style with familiar hymns and modern praise. You are welcome to visit us Sunday Mornings at 10:00 a.m. Welcome to our community. Find us Facebook at www.facebook.com/mvccaz or follow us on Twitter @MVCCAZ